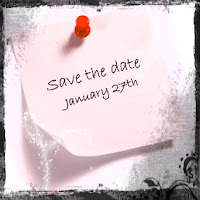 I now have a new countdown on my page.  21 days until my surgery for getting my expanders put back in.  YAY!  That is Friday, January 27st.  I thought I'd have to wait atleast a few weeks longer, but this is just in 3 weeks!  The appointment today with the plastic surgeon went well obviously..  He said I looked healthy and he checked things out and said considering what we've gone through things look really good and he didn't see a reason why we couldn't go ahead with surgery as soon as I wanted and we could get it scheduled!  They even offered me January 13th which is only a week from tomorrow!  But the surgeon then pointed out that it is Friday the 13th and he's superstitious so he'd prefer not to do that day (he may have been joking) but that was a little too soon anyway!  I have to get things prepared at work and we have a big "thing" going on in 2 weeks, so I need to stay atleast through that.  It won't be too bad this time since it won't be nearly as long of a leave.

We discussed the alloderm again and he really doesn't think it's worth the risk.  He's only used it one case of delayed reconstruction (which is what mine is considered now) and it was a different situation all together than what I'm thinking I'd want it for.  He thinks we can still achieve a reasonable size for me (and I'm pretty sure he knows what I want), and if we feel like there is a coverage issue (like need more tissue covering the implant) we can look into fat grafting... he told me to eat more icecream!  I explained that I'm already actually on the heavier side of where I've been weight wise in my life..  So we'll see.

He said I'd have the drains again for about a week (bleh) and then at some point... maybe a couple weeks (?) we'll start doing the fills and fill for about 6 weeks, then they'll need to sit for a few months.  He's not going to have me take any antibiotics preemptively.  He was saying there some merrit in doing a long course of a particular antibiotic followed by a sulfa antibiotic, but we can't do that because I'm allergic to the sulfa.  But he doesn't think at this point that we really need to do anything differently than he would with someone without history.

This was good news.  I'm excited to get on to the next step towards being done with all this!  And I'll have boobs!!
at 8:24 PM

Amanda
I am 32 years old, living in Idaho with my husband, and 2 beautiful daughters.


Visit BRCA Umbrella - The BRCA Gene and You